inc vat ex vat
Our web site uses cookies so you can place orders and we can provide a better service. Continue to use the site as normal if you're happy with this, or find how to manage cookies. OK, got it
NEXT DAY DELIVERY Available
Over 32,000 products
UK DELIVERY FROM £7.95+VAT

What Impact Will BREXIT Have On The Catering & Hospitality Industry 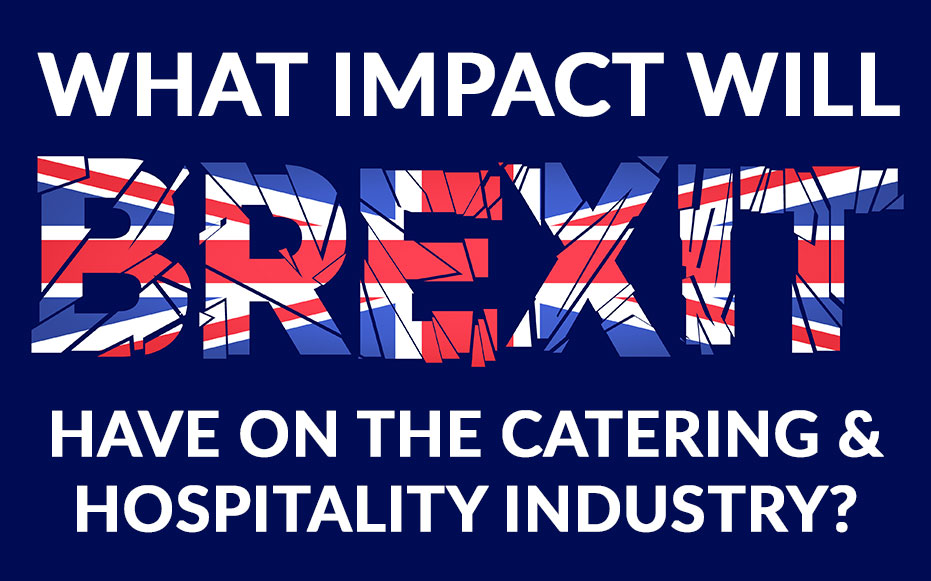 Now that the Brexit dust has settled, the UK's residents are learning to live with the major impending changes coming their way. In the aftermath some questions have been answered, but some glaringly obvious questions about certain industries have still not been sufficiently answered. With tourism and hospitality contributing 10% of GDP globally, and 3.6% of the UK's GDP in particular, no one is underestimating the significance Brexit could have for the UK.

For as long as anyone can remember, the number of tourists entering the UK from other European countries has been more than double that of residents from other countries around the world. Once Article 50 has been invoked by the powers that be & the decoupling process begins, the fate of the country could well come down to the specific deals that are set in place.

If Britain green lights the 'Norway Option' and joins the European Economic Area (EAA), the impact on EU-UK-EU travel will be practically nothing. However, Britain's tourism industry will be drastically affected, if the Government decides to only enter into a free trade agreement without commensurate free movement of peoples and services.

In the case of visa requirements, European visitors to the UK would need to comply and subsequently so would UK residents visiting Europe. The choice between cheap, visa-free movement, say, from France to Italy and back, as opposed to restricted entry to the UK, would incite a French family to take the intra-EU option.

It's increasingly likely that the leisure and hospitality sector's short-term aspirations and progress will be adversely affected, as potential falls in house prices and uncertainty about the UK's economic outlook causes consumer reticence. These economic effects will primarily hit the food and drink sector, but those operating in hotel and leisure organisations could actually benefit. Hotel & leisure workers may reap the rewards of an exchange rate-driven boom that would come from a weaker sterling, increasing overseas visitors' spending power.

With so much uncertainty surrounding the terms of the UK's exit from the EU, it is difficult to make a long-term forecast of what the demand-side trends will be. A prolonged economic downturn, or an increase in personal or indirect taxation, would restrict discretionary spending, making for a tougher environment across the hotel, travel, catering and fitness sectors.

As for investments, private equity funds could be affected. If global investors opt to by-pass UK funds there would be a reduction in new money supply and some funds might put a halt to new investment.

The slump in the Sterling against the Dollar will contribute to accelerated inflation, as costs in manufacturing and production are hit.

Nevertheless, the exchange rate now weighs in favour of overseas tourists, whose spending money will go a lot further than prior to the drop. The overall lower costs of trips will attract those planning trips to the UK over other nearby destinations, and this will promote much-needed stability in the hospitality and restaurant sectors.

The biggest threat from Brexit will be through changes concerning migration and the impact on employment legislation. An immigration cap will have a major negative impact on the migrant workforce, which is seen as the perfect staffing solution for all companies in the hospitality industry. UK companies would suffer detrimentally if they no longer had access to the skills and talents of individuals from outside the country.

Nevertheless, the UK catering and hospitality industry is used to uncertainty and is a world-leader, that has show it's robust and resilient ability to deal with even the toughest & most altering of times. For this very reason, long-term Brexit prospects are rather bright.

There has long been an argument that tourism should be offered an exemption from the full VAT rate, instead benefiting from the 5% rate currently enjoyed by such industries such as green technology.

Brexit may bring this a step closer to happening, according to John Whittingdale MP, Secretary for State for Culture, Media and Sport. Speculating on newfound legislative freedoms, he said: "If we wanted, for example, to abolish VAT on accommodation or attractions, we could now do so."

"We couldn't have done this before when we were in the European Union."

The idea behind such a move would be to capitalise on increased resulting from the weakened pound. It is thought that any changes may also one day apply to restaurants as well further encouraging spending in these sectors.

Copyright © The Beach House Agency Limited. All rights reserved.
e-commerce by SAYU
X Thank you for subscribing to